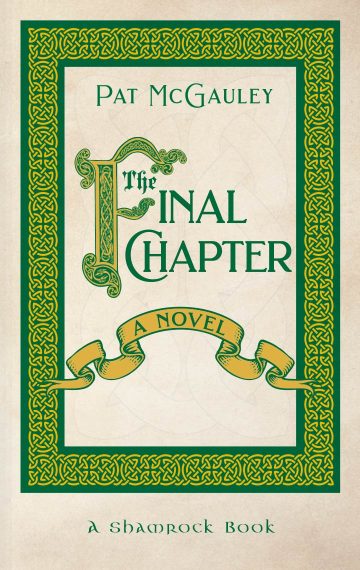 Minnesota author Pat McGauley’s fifteenth novel finalizes his five generational Moran family saga. The end of the lineage is Father Mickey, a wayward and winsome priest who is considering the process of being released from his sacred vows. For years he has been in love with and now wants to marry his high school sweetheart, Mary Reagan. Once he is released from the priesthood his life becomes even more complicated than before. Tensions between Mickey and his bishop become so acrimonious that the Vatican needs to intervene. Mary’s story is equally complex as she strives to cope with her own disappointments. Could the two most important men in her life be about to abandon her for their own selfish motives? Both Mickey and their son, Michael, have chosen paths that leave her stranded in a town where the future is becoming increasingly bleak. McGauley’s new story has an exclusive flavor that others have not dared to breach. In ‘The Final Chapter’, Mickey’s life is depicted in his own words — his innermost thoughts are described in a first-person portrayal. As with previous novels, the settings are in uniquely colorful Northern Minnesota. Much of the action occurs on the notorious Hillside Neighborhood of Duluth. Several colorful new characters are integrated with the familiar people in Mickey’s orbit. Readers will not be disappointed. New insights inspire new directions as the story races to unexpected conclusions. As the title suggests, in all likelihood this will be Father Mickey’s stage exit.

Due to COVID-19 I have no events or book signings scheduled.  Please check back for future events & book signings. … END_OF_DOCUMENT_TOKEN_TO_BE_REPLACED