Minnesota author and native son, Pat McGauley, is a former Hibbing High School social studies teacher, and a former public servant who also worked in the taconite mines of the Mesabi Iron Range.  The Hibbing High School has often been referred to as ‘The Castle of the North’ for its architectural beauty and educational excellence.  It was my great privilege to have taught there for nearly thirty years.   My public service experience was serving Governor Al Quie as the Commissioner of the Iron Range Resources Board.
Born in West Duluth’s Riverside neighborhood, my family moved to Eveleth in 1954 and one year later to a new mining community named Hoyt Lakes where I graduated from Aurora-Hoyt Lakes H.S. in 1960.  Later I earned my bachelor’s degree from Winona State University and then a Masters in public administration from the University of Minnesota, Minneapolis. 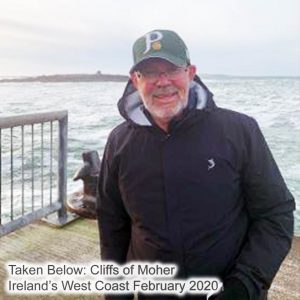 In 1978, I was employed as an historian for the Iron Range Interpretative Center in Chisholm.  My work included interviewing and tape-recording early Iron Rangers from miners,  to homemakers, union leaders, and people from every diverse ethnic background and walk of life.  These oral histories and many others on file—along with a vast archive of materials at the Research Center (Chisholm), inspired my love of this region’s colorful history.  That deep affiliation later resulted in my three early novels—The Mesabi Trilogy—historical romance/dramas blending real and fictional events that shaped the region’s landscape.  Twelve additional novels (action/mysteries) would follow.  My unique writing ‘project’ chronicles a prominent Hibbing family through five generations, the entire twentieth century, and up to the present.  I have  also published three children’s books, the latest being The Midnight Hour. I continues to blog while working on my next novel.

Due to COVID-19 I have no events or book signings scheduled.  Please check back for future events & book signings. … END_OF_DOCUMENT_TOKEN_TO_BE_REPLACED